8 replies to this topic

As you might have heard, TECREAT (Tanktastic English Community REcreational and promotionAl Team) is being continued after a period with some internal matters. That means that you, the Tanktastic English Community, will now have a full team available to organize contests for the English Community only. And so, it was decided that TECREAT may host up to two (2) contests a month with prizes included. But let’s not talk about that too much at this very moment, as more information and details will be announced in due time.

This September, a special event took place which is, of course, the 5th Anniversary of Tanktastic. Although we already celebrated this event with a contest hosted by Denis.tw, we would like to celebrate this special year a little more! This is only a one-time event. Therefore, TECREAT decided to give this contest the touch of this special event: the 5th anniversary.

The concept of the contest is like the Christmas Truce contest, held during Christmas in 2016. Fellow tankers; friends; those that were with you the last five (5) years, those with who you have been sharing stories, fun, laughs and more, show your bond that you established with your fellow tank commanders during those years. We ask you to provide us with the best examples of the remarkable camaraderie you have with the ones you have been sharing unforgettable moments and friendship with. Show us the fun you had with those people in the past five (5) years of Tanktastic, whether it is a screenshot or video. Show us the camaraderie you have built, show us the bond of you and your fellow tank commanders. Simply put, you have to provide us with the finest example of how you and your fellow tankers of this Tanktastic family celebrated this special event, the 5th anniversary of Tanktastic.

The following image is an example of how a submission could look like: 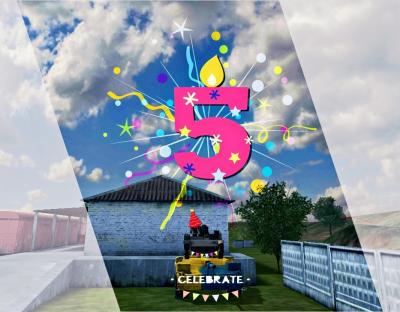 Of course, a contest without prizes isn’t really a contest. There will be three (3) winners selected and will thus receive a prize. The prizes* will be as follows:

3rd place: A camouflage. The winner may choose a camouflage of his/her own choice and select the tank on which the camouflage should be added.

Each entry sent in will be judged by the Jury on several aspects of the created media, and will be given points, ranging from 1-10 points per aspect. An entry will be judged according to the following three** (3) points:

● Creativity; how ordinary is the entry? (A title counts for points as well)

● Difficulty; of what level is the entry.

● **In case an entry has been edited, it will be kept in mind when judging.

If you have any questions about the concept, the prizes or the judgement, please contact any willing member of TECREAT through a Private Message (PM)!

All those taking part to the contest will be allowed to submit their entry in a Submission Topic that will be open from the 29th of September 2017, 20:00 CET until the 30th of September 2017, 22:00 CET. All submissions will be reviewed in the following day, the 1st of October and the winning players will be published in a separate topic the same day. Prizes will be awarded to all winners as soon as possible after publishing the winning players.


If you have any questions about the concept, the prizes or the judgement, contest guidelines or anything else regarding this contest , please contact any willing member of TECREAT through a Private Message (PM)!

Thank you all for being the amazing Community the last five (5) years and of course in the future as well and best regards from all of us!

To be clear, it is not necessary to edit your picture, video. As said under the 4th point of the contest guidelines, you are allowed to do so, but that also means that you do not need to edit said media.

Community staff can participate too ?


So wait my screen

I'm looking forward to all the great submissions we will be getting. The Christmas contest was the only contest that required effort to participate I was around for but due to my lack of content I could never participate. I am very happy to give my feedback though.

Proud member of the tanktastic community

Never really could get into the designing of these.. however i wish everyone luck

​Swole is the goal! Size is the prize!

Back to Forum Contests

Also tagged with one or more of these keywords: contest, TECREAT, 5th, Anniversary, official