As many of you know, the Nashorn ace Albert Ernst happens to be my great grandfather. He did some pretty interesting stuff, so I figured I'd give him his own page. "...millions have fallen before me, including many family and friends; I am not afraid to become the last."

On February 1st, 1942, He was awarded the Iron Cross, First Class

He was involved in the Battle of Vitebsk, in which his Nashorn "Buffalo" took down 19 Soviet tanks, as well as a ground attack fighter. He also took out a JS-2 at 4,800 meters. Following the battle, he was nicknamed the "Tiger of Vitebsk" and received the Knight's Cross. Following this, he was transferred to the Jagdpanthers of the 1299th Tank Destroyer Battalion. He fought at Olita, where his vehicle was disabled and he had to fight off wave after wave of attacking Russian infantry. He was shot in the head by a Nagan pistol defending his vehicle, and they were forced to retreat.

Ernst was transferred to Germany to treat his wounds, where he received the Honor Roll Clasp and Wound Badge in Gold. Although he was not supposed to continue fighting, he was called to Berlin to join Special-Purpose Unit Skorenzy, where he used his knowledge of English and French to masquerade as a US "Captain" commanding the 405th Armor. He there met Otto Skorenzy (who talked at length about the possible V3). He participated in Operation Griffin. Later, he was transferred to the 512th Heavy Tank Destroyer Battalion and was stationed in the Ruhr pocket as a Jagdtiger commander. He was tasked with the job of covering the withdrawal of the German forces following the failed assault on the Remagen bridgehead. He then fell back to Iserlohn, where eventually he surrendered Hemer, then Iserlohn to American forces, despite disgust from local civilians. He refused to leave his men when offered his freedom, and forced the American Lieutenant Colonel, Bob Kriz, to take him into custody with his men.

Hauptmann Albert Ernst later moved into Iserlohn, and currently lives there to this day, writing occasionally to his good friend Bob Kriz.

Video of his surrender: https://www.youtube....h?v=JjD5lj7ywQM

Hard to believe that's your grandfather!

Yeah. He's really sweet and funny. You know, that typical grandparent who likes to spoil all his great grandkids rotten. Except he could also kick my butt too lol.

is he still alive?

Yes. And he stills lives in Iserlohn lol.

u know what u need to do, is u need to try to convince him to get a forums acc cuz I'm sure most of us most likely really wants to see him :3

Nope think positiv he will make it still a lot of years.

Thanks for telling us that very interesting story

Very interesting story,
We are in the very first stage of restorating a Nashorn Panzer.
We would really get in contact with your granddad for some info and pictures.
Hope you are willing to help us

You're restoring a Nashorn tank destroyer? Where did you find something like that?

We only have the first parts, waiting for the rest, these days this is comming from the east.

Excuse me, it's not every day you hear someone is trying to rebuild a World War II vehicle....so I apologize for being a little miffed.

I don't know how much I'll be able to get out of my great grandpa (he is very old, and I do not wish to disturb him too much), but I will do my best to help you.

My business Email is littleeagle@embarqmail.com

I would like to know what the first parts you are receiving are...I enjoy studying such things as the Nashorn (armor buff on a tank forum? Go figure!) 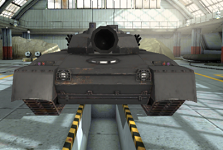 I think Mark Felton Productions did a story on your great grandfather.

He saved the town and then he loved it so much he moved there.  How sweet

Mhm this is very interresting!

I accidentally came across this topic, but it seems to me that this is too much. You shouldn't be proud of such things. This should rather be forgotten. Proud of his SS ancestors – it's disgusting.

Your family is who they are. I would be proud if my G-Pa was in the SS just as if he was in any other Military. Just because it was the SS makes no difference.

Also tagged with one or more of these keywords: World War 2, Panzer Ace, Nashorn