It has been a while since we gave some information regarding the Tanktastic Tournament. Not to worry, we haven’t forgotten about it! After the team slots were filled up we started to match teams based on their preferences given. We tried our very best to match teams with similar preferences as good as possible, however, we did not succeed in doing this in every case. This was inevitable, and therefore we hope you understand it.

Now, let’s move on to what you’re all here for, the matches. The first stage, also known as the qualifiers, will take place next week (between the 17th and 19th of May). In accordance with a Staff member, a time is set for the matches to commence and both teams will have to be available at that time. The Qualifiers stage consists of three (3) matches using a best-out-of-three format; whichever team wins most of the matches is the winner of this round. All teams have been divided into four groups. At the end of the Qualifiers stage, each group will have a team that won and a team that lost. Each team that won in their respective group will move on to the next stage of the tournament, the Quarter Finals. This stage has been divided into two sections, the Winners Bracket and the Losers Bracket. The teams that won in the Qualifiers stage will move on to the Winners Bracket and the teams that lost will move on to the Losers Bracket. As soon as the Qualifiers stage is over additional information regarding this second stage will be published. Stay tuned!

Here is the face-off chart for the first stage, the Qualifiers: 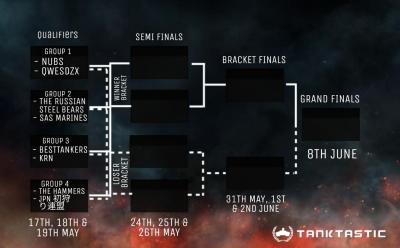 Before the matches are held, teams and most importantly their captains will have to discuss at what time they would like to play their matches. Both teams have to agree with this time and a Staff member will be assigned to the match based on this. There are some additional options as well, such as extended match time, which will have to be discussed between the teams as well. Make sure you notify the assigned Staff member of any options you choose to add. The Staff member will join the match and make sure the competition rules are not violated.

Round time: considering the number of maps each team has to play we have decided the round time to be 10-15 minutes, the teams can have an influence on this though by suggesting a round time that is higher than the default time. In this case, both teams have to agree on this, as well as the Staff member that will be present during the match. We will ensure that there will be the necessary amount of time available.

Unfair gameplay/disruptions: any unfair gameplay; logging, or any other major disruptions that cause an advantage to the team/player. (any of such actions is strictly forbidden and will result in disqualification. As a result, the other team will win the match)

Prearranged matches: in case the teams have pre-arranged the match, both teams will be disqualified from the tournament.

·         First warning that the team captain has to acknowledge.

·         Third warning will lead to a disqualification from the tournament.

Keep to the EULA and remember, the moderator's decisions are final and are not to be argued with. If you have questions or concerns regarding the tournament, feel free to contact an event organizer or staff member before your teams match begins.

Moderators can also decide to exclude a team member from the tournament, thus the stand-in will have to step in, or the team can continue playing with one less player.

Joining too late/absence: if a team is unable to join and/or play at the time they set the other team will receive the win.

Incorrect vehicle: if a player joins with a not allowed vehicle they will be asked to change the vehicle to an allowed one. Failure to abide this can lead to disqualification of the team.

If you have any questions regarding the tournament, feel free to ask any willing member of the Staff.

Also tagged with one or more of these keywords: tournament, prizes, tanktastic, tecreat, qualifiers