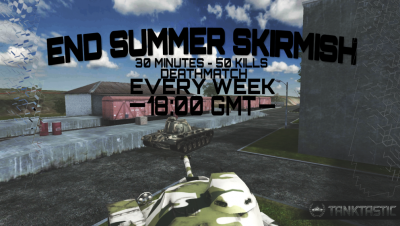 a new month has arrived which means that, and you probably already guessed it, there will be a new contest! Unlike all the previous contests hosted by TECREAT which included sceneries, artwork and much more, this one requires skill in the game. Most of you are familiar with the WWll League system we used to have before Tanktastic V2.0 was published and this contest will somewhat follow that very system. For those who are not familiar with the WWll League's system, this is a brief explanation: a game of deathmatch is held every week on Friday 18:00 GMT with the maximum duration and goal, thus a game of deathmatch of 60 minutes and 70 kills. For each week, a new class is picked with various vehicles in them.

This month's contest follows that very concept, however, a few chances were made. Instead of the 60 minutes timeframe and 70 kill goal that was availabe in version 1.22 we have to adapt to the maxium timeframe and goal of V2.0, being 30 minutes and 50 kills. Aside from that, the concept of so-called "groups" will not make a return either. Instead one vehicle will be selected each week. The time however will remain the same. We from TECREAT want that everyone is able to participate and therefore we will try to pick tanks of different levels. We also will try to announce next week's tank as soon as possible so people can either get it, upgrade it or practice with it before having to fight with it.

Now let's move onto the prizes! As this is a weekly contest we decided to not have huge prizes, but we think that you will like the selected prizes:

RULES:
1 - Each room will be created by a TECMAT/TECMOT or TECREAT member only. Other rooms will forcefully be shut down.
2 - Any player that uses the wrong tank will be kicked from the rooms. Multiple kicks will result in more severe punishment on behalf of the Staff.
3 - Every player must abide the EULA while playing. Cursing, insulting, teaming etc will not be tolerated and might lead to disqualification.

- Additional rooms will be created by Staff if one room isn't enough.

IMPORTANT: ALL ANNOUNCEMENTS REGARDING THIS CONTEST WILL BE MADE IN THIS VERY TOPIC!

Tomorrow, the 10th of August the first match will take place. The information:

We wish all of you participating the best of luck, and if this turns out to be something that the community actively participates, we will see to extending the duration of the contest! Have fun, play fair, we will see you on the battlefield!

This would be great
HEAT SPAMMING!
Wait will be other tanks be in this kind of event after M48 Patton DM?

Dave, if you need any help with new photos, I will help:p

This would be great
HEAT SPAMMING! Wait will be other tanks be in this kind of event after M48 Patton DM?

Yes, as the topic says, a new tank will be chosen each week.

Hope everyone has fun with our new gamemode. All I know is that the m48 is gonna be a tough cookie to crack.

So, bringing the tanks of M-48 patton dosen't show who you are, it depends upon yours skills and strategy that what you are....

So, hope you guys all the best!! Have a greatfull enjoy!! and show the players who you are!!

wait nvm they took a pic of the results right before the match ended.

Nice!! Like I told you, it's all about the strategy that what you are...

The normal, turreted one.

So.........not really much people showed up. It's probably because the whole event happened on Friday which is a day when most countries have school. Like I suggested during the match and discord reschedule the matches on the weekend mainly Saturday. I only got 2nd place because I was only one of the few people to join.

Time problem for me

Don't worry guys I won't be there to steal ur kills.

Wikia Admin and Mod 🔥
Back to Official Events

Also tagged with one or more of these keywords: contest, tecreat, summer, end, skirmish, pirzes